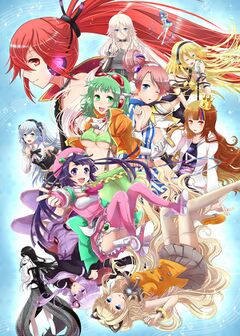 Not pictured: More than three quarters of the cast.[1]

Vocaloid (a portmanteau of "vocal" and "android") is a series of music synthesizing programs created by YAMAHA Corporation. The program is separated into two parts; the editor, which is used to process any voicebank chosen by the user through their input, and the various voicebanks, each with their own unique voice traits for different user taste or purpose. Using a Vocaloid sounds simple enough, as the user simply has to type lyrics and adjust the melody of the song they're creating; however, fine-tuning is necessary to reach better, more natural-sounding results.

There are currently 70+ different Vocaloid voicebanks[2], with the engine itself having had multiple overhauls over the years to increase end product quality. The voicebanks in particular have become popular; due to their more or less blank state with little (if any) official background, fans have gotten into creating their own personalities and interpretation of them. Fanmade characters also exist, with some even gaining recognition from the higher-ups. The UTAU software also helped bringing many fanmades into life.

In The New Tens, Vocaloid has taken major steps in the entertainment industries, with live concerts (done with projections, in the style Gorillaz and the 2012 2Pac concert), video game crossovers, collectible figure lines, and even race car sponsors. Of course, there are also adaptations of the works related to Vocaloid, such as the manga Hatsune Mix and the OVA adaptation of the song Black★Rock Shooter and the multimedia franchise that is Kagerou Project.

The producers CosMo, Deco 27, and Mothy have their own pages, as does the band Supercell and the music-video-making software Miku Miku Dance.

Note: The following is only for tropes related to official Vocaloid materials. For character-related tropes for each voicebank, go here. For tropes on song, fanon, and other fan works, go here.

Tropes used in Vocaloid include:
Retrieved from "https://allthetropes.org/w/index.php?title=Vocaloid&oldid=1682748"
Categories:
Cookies help us deliver our services. By using our services, you agree to our use of cookies.