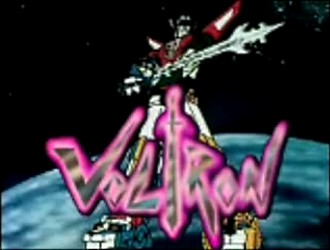 Loved by good, feared by evil. Narrated by Optimus Prime.

A Combining Mecha cartoon, created in 1984 by combining the Toei anime shows GoLion and Dairugger XV (this was necessary to meet the minimum 65 episodes for syndication). This is still considered the combining mecha in areas of pop culture that don't have much crossover with anime fandom (for instance, hip-hop), but even anime fans still love it.

While not as severe as the editing of Robotech, changes were made to fit the two series together, such as Zarkon (Lion Voltron's main villain) being sort of a vassal of the Drule Empire (the bad guys of Vehicle Voltron), the two short kids being brothers, and the Galaxy Garrison of Dairugger having scenes cut into Lion Voltron, where they would talk about the situation, but never do anything (since there was no "fight footage" available that featured the conversing characters).

Eventually, additional episodes of Lion Voltron were made with all new footage from Toei Animation, which were not based on anything from GoLion. A special called "Fleet of Doom", which featured both Voltrons, was also produced in this way.

Lion Voltron is better remembered, probably because it aired first; this is the same reason the Macross part of Robotech is often remembered more than the latter parts. (It should be noted that the other series of both shows still have their fans.)

Vehicle Voltron had a whopping 15 characters (essentially three five-man bands who all joined up in the end); the target audience (children) could barely keep them sorted out then, much less remember them fondly as adults. Some fans, however prefer "Vehicle Voltron" for its more realistic and somewhat harder sci-fi premise, involving people settling new planets when the old are dying or have become over populated.

In both versions, the Monster of the Week was always a Robeast. Some Robeasts were huge Mecha, and others were apparently non-robot aliens that grew to gigantic size when hit with a special energy beam (a plot device that would be heavily reused decades later in the first season of Power Rangers). Both species of Robeasts were always killed by being sliced in half with the Blazing Sword, upon which they would explode. The explosion footage (like much of the rest of the fight scenes) was recycled for all episodes, so all Robeasts die the same (to censor out some of the quite violent deaths in the actual series).

In the United States toy market, Lion Voltron was sold under the name "Voltron III", while Vehicle Voltron was sold as "Voltron I". A third Voltron, "Voltron II", was also available. This "Gladiator" Voltron was based on Albegas, which was scheduled to be released as another in the US Voltron saga (but, as pointed out above, never materialized).

According to Word of God, World Events Productions originally intended to use Mirai Robo Daltanious to make Voltron, but they asked Toei for "the show with the lion" and were sent GoLion instead, then ended up deciding that they liked it better. Ironically, Daltanious is made up of one of each of the types of robots used in the Voltron series: a lion, a vehicle, and a humanoid "gladiator".

In the early 21st century, Voltron was revived in the form of Voltron: The Third Dimension, a completely CGI animated continuation of the Lion Voltron storyline, set a few years into the future relative to the original, as there are important changes to the setting, but the character cast stay mainly the same. This sub-series tends to have a slightly darker, more mature take on its plots. In its second season, Voltron was redesigned as a "Cyber Stealth" model. How exactly a robot that big could qualify as "stealth" even when painted black is anyone's guess.

There is talk of a movie, but the rights are apparently in dispute, so expect it to sit in Development Hell for a good long while. There have also been several comic book series based on Lion Voltron, including a series that basically retells the origins of the "Voltron Force" and their discovery of Voltron. In addition, Privateer Press will be releasing a Voltron tabletop miniature game based on its Monsterpocalypse ruleset. The show was also used in a series of "Sprite" commercials in the early 2000's (though it was very rap-related).

Finally, there's Nickelodeon/Nicktoons' Voltron Force a Sequel Series that premiered in spring of 2011. It picks up seven years after the original; After an incident the lions went crazy and were decommissioned by the Galactic Military, but when Lotor comes Back from the Dead, it's up to the old team and the lions, as well as three new trainees to stop his evil plans.

You can watch the original on YouTube or Hulu.

Tropes used in Voltron include:

Retrieved from "https://allthetropes.org/w/index.php?title=Voltron&oldid=1770762"
Categories:
Cookies help us deliver our services. By using our services, you agree to our use of cookies.