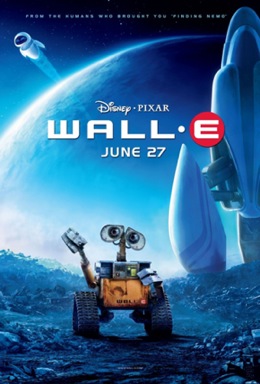 Around seven hundred years in the future, humans abandon the now-inhospitable Earth so it can be cleaned up by a small army of "Waste Allocation Load Lifter" robots (WALL-Es - the E stands for Earth) whilst they enjoy a five-year vacation cruise in space. The plan doesn't really work; seven centuries later, the last of those robots to still be running -- the titular WALL-E -- is still collecting junk and living with his pet cockroach. One day, WALL-E is going about his business as usual when a spaceship carrying a much more modern robot arrives to drop her off. Her name is EVE, and WALL-E is smitten at first sight. When the ship comes back and picks her up, he stows away.

Oh, and it's got Awesome Art CGI.

WALL-E was added to the National Film Registry in 2021.

For information about the DVD short, BURN-E, check the Pixar Shorts page.

Tropes used in WALL-E include:
Retrieved from "https://allthetropes.org/w/index.php?title=WALL-E&oldid=1946831"
Categories:
Cookies help us deliver our services. By using our services, you agree to our use of cookies.