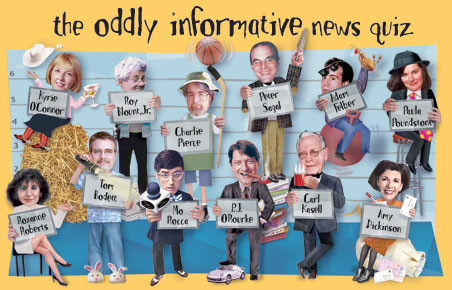 Wait, wait, here's the stars of the show.

One of the few American attempts at the quintessentially British Panel Game format. Based loosely on the BBC program The News Quiz (which also inspired Have I Got News for You), Wait, Wait airs weekly on NPR and features NPR News's former anchor Carl Kasell as announcer/scorekeeper. The host is Peter Sagal. Rotating panelists include Tom Bodett, P.J. O'Rourke, Paula Poundstone, Paul Provenza (director of The Aristocrats), and Mo Rocca (formerly of The Daily Show, currently of CBS Sunday Morning). Call-in contestants compete for the prize of getting Carl Kasell to record an answering machine (or cell phone voicemail) greeting; panelists are scored on their performances but don't get anything for winning.

Tropes used in Wait Wait... Don't Tell Me! include:

Peter Sagal: Of course, this means we no longer need to have Carl on an 8 second delay.
Carl Kasell: Damn straight, Peter!

Peter Sagal: "In just a minute, Carl tells us about his favorite Transformers, Optimus Rhyme."

Maz Jobrani: The British are so polite. Was the button that announced it was wrong just a 'never mind.'
Adam Felber: When we said 'water landing' we meant another round of drinks!