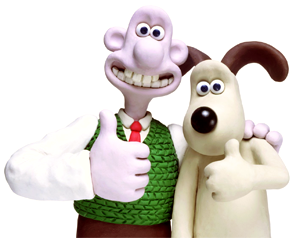 Wallace and Gromit are A-OK.

This series of four short animated films and a full-length movie -- all done using old-fashioned stop-motion animation -- is about a kindhearted but clueless Lancashire-accented inventor, his long-suffering sentient dog, and his love for cheese. Produced by Nick Park for Aardman Studios, the series has won fans and accolades on both sides of the Atlantic, including numerous Oscars, and is a rare example of British suburban life visible in media exported to America.

The films are, in order:

In 2003, Frontier Developments released a video game known as Wallace & Gromit in Project Zoo, which saw the return of Feathers McGraw as the villain in an original storyline; it was So Okay It's Average in most respects. In the spring/summer of 2009, Telltale Games released a series of four episodic Wallace & Gromit adventure games, collectively Wallace & Gromit's Grand Adventures, for the PC and Xbox Live Arcade. The games are notable for successfully replicating the look and feel of the shorts, to the point of having fingerprints and other clay modeling details visible on the characters.

The Grand Adventures episodes are, in order:

In 2010, BBC One commissioned a television program, Wallace and Gromit's World of Inventions, an educational program about famous or revolutionary inventions, hosted by the two. It begin airing in November with the episode Nature Knows Best.

See also its Spin-Off series Shaun the Sheep and Timmy Time, the spin-off of the spin-off.

Tropes used in Wallace and Gromit include:
Retrieved from "https://allthetropes.org/w/index.php?title=Wallace_and_Gromit&oldid=1833830"
Categories:
Cookies help us deliver our services. By using our services, you agree to our use of cookies.