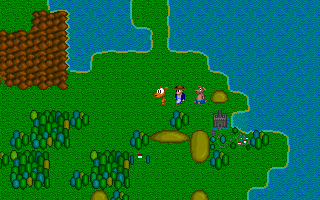 Sorry, folks. Your typical teenage swordsman and his friends couldn't show up. So instead, we got these guys to take their position.

Lord Hasim has been overthrown, plips run rampant, and a menacing evil lurks in the shadows... or is it a cactus? What hamster is spiffy enough to save the world? Bob!

Wandering Hamster is a freeware RPG made by James Paige using the OHRRPGCE, presumably made as a sort of a demonstration of what kind of games the engine is capable of making. It casts Hamster Republic's mascot Bob the Hamster as a freelance monster-hunter and adventurer who finds himself (as well as others) getting involved in various JRPG-style escapades. Currently playable yet still remains unfinished despite actual development going as far back as 1997. Current version can be found here.