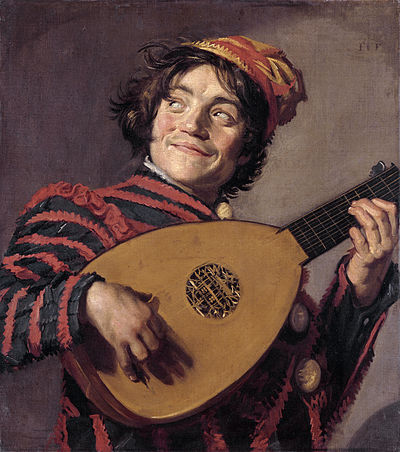 Hmm-did someone call for whimsy?

The wandering minstrel is a classic fantasy character and a frequent feature in many Ensembles. He wanders the land, making music for money. Generally carries a lute, (or sometimes a flute) and always has a song in his heart.

In a Five-Man Band, this guy is The Chick and rarely has any fighting ability. Occasionally, he will have Magic Music that makes him slightly more capable in battle.

The trope goes back at least to Alan-a-Dale, the minstrel friend of Robin Hood (which is to say, Victorian times; Alan was a late addition). The word "minstrel" comes from Latin ministerialis-- "a functionary living as a member of the knightly class, with either a lordship of their own or one delegated from a higher lord." Fiefs were very often not self-supporting, and poor knights were forced to supplement their income by other means, such as traveling from court to court to offer services to various patrons—one of which was entertainment.

There's also the French tradition of the troubadour/trouvere from the Middle Ages; singers and lutists that would wander around and compose songs of courtly love. They were one of the first groups to take music from the sacred to the secular realm.

If a Wandering Minstrel is very lucky and very good, he can get a settled job as a court bard in a Standard Royal Court. If unlucky, stuck as a Street Musician.

Not to be confused with Spoony Bard or The Bard; and especially not with a Minstrel Show.

Examples of Wandering Minstrel include:

Retrieved from "https://allthetropes.org/w/index.php?title=Wandering_Minstrel&oldid=1957826"
Categories:
Cookies help us deliver our services. By using our services, you agree to our use of cookies.