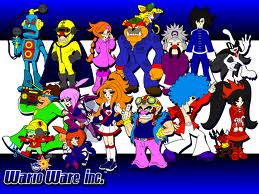 Wario and his staff. (IMAGE!)

The Wario Ware series is essentially a collection of hundreds of mini-games. (PLAY!) And the gold-hoarding, gas-cloud-belching Wario Land is in charge of it all, aided by a cast of wacky friends and neighbors. (SIDEKICK!)

But wait! (WAIT!) There are three important details to these mini-games:

That's pretty much the WarioWare games in a nutshell. (CRACK!) Each game is a handful of about 200 or so "microgames" that come at you in roughly five-second increments, each time prompting you to do a simple task (POUR! STOMP! etc.). The microgames are shuffled at random, (MIX!) so you'll have to react fast to succeed (CHEER!) and impress Wario and his cadre of microgame developers (APPLAUSE!). Once you've unlocked everything, the games basically become quests to beat your high scores at all the games. (POINTS!)

Wario also appears in Super Smash Bros. Brawl with his default appearance having him wear his clothes from WarioWare (his Wario Land appearance is available as well (RETRO!)), along with a WarioWare-inspired stage and Kat & Ana as Assist Trophy. (SMASH!)

The series was made by the same team that made Rhythm Heaven, and it shows.

These games provide examples (TROPE!) of