Was It Really Worth It? 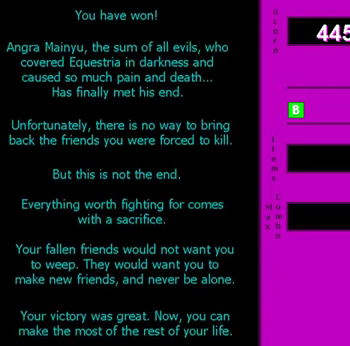 Aww, man! I went through the seventh circle of Bullet Hell for THIS?

"Well, you found me. Congratulations. Was it worth it? Because despite your violent behavior, the only thing you have managed to break so far is my heart. Maybe you could settle for that and we'll just call it a day."

Bob takes things too far, either in his quest for power, revenge, or even just to win a battle. After it's all said and done, he or Alice have to ask 'was it really worth it?' In this case, it's actually a valid question, possibly for a number of reasons. Maybe killing his opponent made him just like them. Maybe to win a friendly duel, he had to shatter his best friend's weapon (or worse, shatter his best friend!) In any case what Bob's done raises serious moral questions for him, and the answer isn't necessarily "Hell yeah, it was Worth It!"

Note that the question doesn't necessarily even have to be asked, nor must it be after the deed's been done.

Not to be confused with What the Hell, Hero?, which is about the character being called on for flat out evil things. If someone wins a battle, but accidentally kills their friend's sister in the process, it's this. If they intentionally do so, and are called on for it, it's that. If Bob decides it's not worth it after all, but only after the fact, it's My God, What Have I Done?.

If the 'it' was something like a Heroic Sacrifice, this may cause a Bittersweet Ending. After all, the Big Bad may be dead, but so is Bob, and that's no cause for celebration.

A subtrope of Pyrrhic Victory. See also Pyrrhic Villainy, for where the villain's actions are definitely not worth it. If a character's actions or victory eventually result in him being bored because of it, then you have a case of Victory Is Boring. Compare And Then What?

Examples of Was It Really Worth It? include:

Oracle: "You travelled five thousand miles. You hooked up with a loose cannon--possibly psychotic--vigilante who doesn't place much value on life...and a world class felon. You stressed my network to the max. You faced the world's deadliest martial artist. All to get back at a guy who didn't call you the next day. Was it worth it?"
Black Canary: "Yeah, it was."

Batman: The promise that we made to bring down the Roman. What it cost us. Harvey...
Gordon: If you're asking me "Did the good guys win?" Yes, the good guys won, Batman. But, I won't know if it was worth it for a very long time...

Arthur paused.
'The Hitch Hiker's Guide to the Galaxy,' he said at last.
'What's that?'
'Oh, just something I threw into the river this evening. I don't think I'll be wanting it any more,' said Arthur Dent.

For what shall it profit a man to gain the whole world and lose his soul?

Danny Tripp: Was sleeping with him for that information really worth it?

The Doctor: I could have killed that Dalek in its cell. But you stopped me.
Henry van Statten: It was the prize of my collection!
The Doctor: YOUR COLLECTION?! Well, was it worth it?! Worth all those men's deaths?! Worth Rose?!

The young people ask what are they marching for, and I ask m'self the same question.