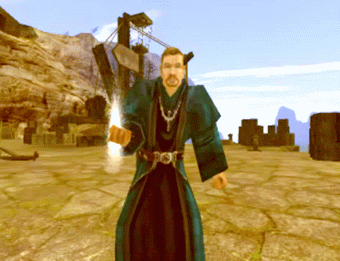 So, who's up for a helping of refreshing cold water... to the face?

Water-Human (orig. "Człowiek Woda") is a Machinima series, created in Gothic II, which tells the adventures and exploits of the eponymous hero, who apparently "likes to rescue people", but the series instead tells the story of him going on a stroll around the world and the consequences of said stroll. It features a lot of silly humor.

The series was originally in Polish, but English subtitles are available on YouTube.

The character also features in a music video.

Tropes used in Water Human include: