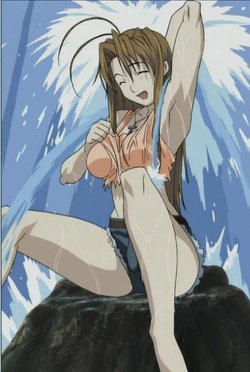 Lost in the middle of a forest? Need to take a shower? Cue the convenient nearby waterfall. Excellent source of Fan Service. Often leads to Outdoor Bath Peeping... and there's good chance it's cold as hell.

In Real Life it's somewhat less practical, particularly for large waterfalls, since in most cases the water would be stone cold and would have enough force to knock you flat if you were to step under it.

Contrast Meditating Under a Waterfall, which has a different purpose. Compare Skinny Dipping.

Examples of Waterfall Shower include: