Everything About Fiction You Never Wanted to Know.
Jump to navigation Jump to search
/wiki/Wayne Graysoncreator 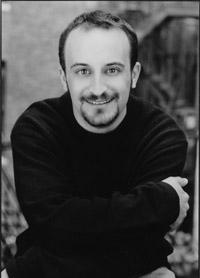 Wayne Grayson is an American voice actor, who works on the properties of 4Kids! Entertainment & Voice Box Productions. No, he is not Batman or Robin.

Grayson is probably most famous for his role of Joey Wheeler (Katsuya Jonouchi in the English manga and Japanese versions) in the English-language version of the second series Yu-Gi-Oh anime (known as Yu-Gi-Oh! Duel Monsters in Japan). He also provides the voice of Teenage Mutant Ninja Turtles character Michelangelo. He was also Phibrizzo in Slayers Next

On his choice of Wayne Grayson for this role, Lloyd Goldfine said:

Apparently, he is aware of Yu-Gi-Oh the Abridged Series. What happens when Joeys meet? Well...