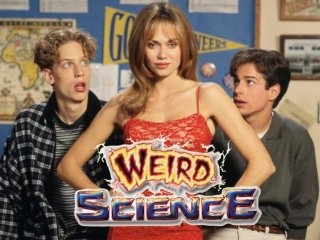 A 1990s television series based on the 1985 movie of the same name. Hollywood Nerds Gary and Wyatt, unable to hook up with real girls, use a computer to "create" the perfect woman: Magical Girlfriend Lisa, whose powers initiate wacky adventures.

The series changed settings from Illinois (in the original film) to California. Probably for budgetary reasons, but they could have at least pretended it was still Illinois.

Tropes used in Weird Science (TV series) include:
Retrieved from "https://allthetropes.org/w/index.php?title=Weird_Science_(TV_series)&oldid=1860923"
Categories:
Cookies help us deliver our services. By using our services, you agree to our use of cookies.