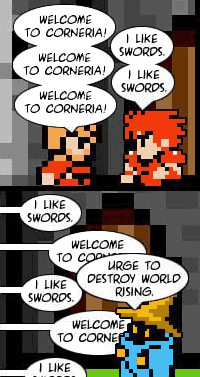 One common feature of most Role-Playing Games are random townspeople that you can talk to and pump for information. However, many developers leave this as a low priority, giving them very limited dialogue that is endlessly repeated each time the Player Character engages them. Usually, it will just be a single sentence or two with little bearing on the plot (most often just giving some local flavor to a town), or a single sentence with some minor hints of the plot (that someone who actually matters will explain in more detail). Often goes hand in hand with poor translations (where the same dialogue that was given lowest priority during the writing will get even lower priority for translation).

Most of the time, individual NPCs don't have anything useful to say, but if you Talk to Everyone, you get a complete enough picture that you can figure out what to do next. (And if your current objective really is to talk to everyone, they might change their lines to indicate when you've succeeded.)

It's especially humorous if you go back to an old town after a major event and the townspeople are still giving the same dialogue they had before (e.g. they still lament over the dragon stealing their sheep long after you've killed it). It can be vexing when you try to envisage the NPCs as people and think they might tell you anything informative.

Many more recent games make a halfhearted attempt to avert this by giving NPCs two pieces of dialogue at a time that they alternate, changing no more often than their one-line counterparts. Another method is to change the dialogue of everyone in the town after you've beaten that town's Fetch Quest (or even after you've completed other plot events), but even this quickly becomes unrealistic if it never changes again. It can get particularly ridiculous when, say, The Very Definitely Final Dungeon has risen and the fate of the world is obviously in the balance, but the NPCs still won't talk about anything other than their livestock or their love lives.

Of course, every dialogue tree ends somewhere, so this trope will always pop up sooner or later.

This is one of the Acceptable Breaks From Reality, since the programmers can't put an endless random dialogue.

Not to be confused with the Planet Corneria. Or the town, although the trope name is from a parody of the game featuring said town.

Examples of Welcome to Corneria include:

Played straight elsewhere in the game, however. For instance, most human NPCs you the player meets have a single line to say; if prompted again, they will just say it again.

The updating isn't entirely consistent, either: a NPC may praise you as a hero when seeing you, then suddenly turn gruff and unfriendly when you initiate actual dialogue. Sometimes, the dialogue will be surprisingly detailed, but have no purpose: the shaggy dog story of NPC dialog, a classic example of which can be had from any of the Atius and Sintav family members in the Imperial City. Other times the NPCs won't switch to their new dialog when they're supposed to, due to a bug. Confusion ensues.

Also, if you've managed to level any of your skills above 70, get ready to hear about it from every single NPC you meet. There are even mods that remove NPCs' ability to comment on your skills, as there's only about one or two lines per skill and their likelihood of spouting them is pretty damn high.

Retrieved from "https://allthetropes.org/w/index.php?title=Welcome_to_Corneria&oldid=1924521"
Categories:
Cookies help us deliver our services. By using our services, you agree to our use of cookies.