What Is This Thing You Call Love? 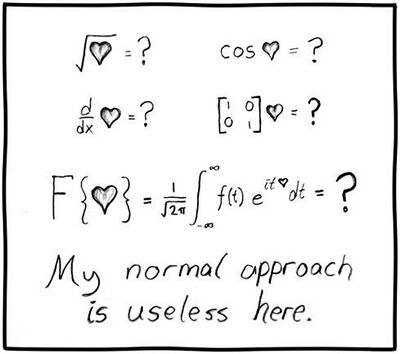 What is love?[1] For humans, it's an emotion that can be the greatest antidote for misery, and a major cause of misery. Unfortunately, that transcendental quality doesn't translate too well into words, which is why love remains only a four-letter word for many non-humans.

Robots are the ones most susceptible to this troubling dilemma, as an increasing number of different-minded creators will not rest until their creations can truly love like humans, which is easier said than done. You can program Ridiculously-Human Robots to protect a specific someone or respond differently to the first person they see, but love isn't supposed to come out of orders. And even if a unique robot contemplates its mechanical heart on whether or not it can love, how can it be proved that it is not merely asking that question because its programming dictates it to do so, and because of actual conscience?

Aliens, especially relatively humanoid ones who coexist with humans, also express curiosity of this strange human custom: why would humans put so much emphasis on a single word that appears to serve no useful function? Universally attractive aliens seem to be vulnerable for instantly falling for human men and needing to be taught in matters of kissing.

It's not just non-human species that need to learn love by themselves: Jungle Princesses and Noble Savages Raised by Wolves may have no learned knowledge of those feelings. Their basic instincts may lead to them acting strongly on any "urges," but they will be unable to properly articulate or understand the desire behind them—at least not until the Mighty Whitey civilizes them. The Casanova, Femme Fatale, or the Handsome Lech, who is no stranger to lust and attraction may, ironically, at some point, have to learn the difference between these and love, when he (or she) meets the right person.

Usually, the question of love is asked out of curiosity, but occasionally it will be deliberately shunned. An intristically malevolent spirit or human hardened to the point of unfeeling will have some idea on the meaning of love, but not enough to threaten their heartless exterior, and they have no intent of exploring that notion further. Of course, if they're good-looking enough, expect an innocent girl to show up and make them uncomfortable with a tightening in their chests and burning up of faces. It's their duty to hate and destroy! How could they ever possibly love?

In all cases, the ultimate question is: Can a robot/alien/savage/demon love? And in all cases (excluding extremely cynical shows), the answer is: Yes, The Power of Love is just that far-reaching. Oftentimes, the answer is used as an indicator of the humanity of the being that speaks more poetically than its appearance.

Often the reason why Evil Cannot Comprehend Good. However, Curiosity Causes Conversion, and can sometimes cause a Sex Face Turn. The answer is often a cure for Creative Sterility. This is one of the reasons Humanity Is Infectious.

Sub Trope, at least structurally, to What Is This X You Speak Of?

Not to be confused with What Is This Thing Called, Love?

Examples of What Is This Thing You Call Love? include:

Retrieved from "https://allthetropes.org/w/index.php?title=What_Is_This_Thing_You_Call_Love%3F&oldid=1860839"
Categories:
Cookies help us deliver our services. By using our services, you agree to our use of cookies.