Where Da White Women At? 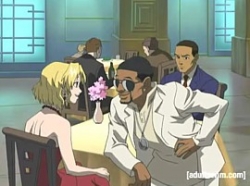 Even Usher likes the white meat.

Just like white men and Asian women can't get enough of each other, and Gentile guys and Jewish chicks go gaga over one another (or Jewish guys and Gentile chicks), so do black men and white women. According to media, anyway.

This one is a bit more controversial, even to this day in some parts of the world. In Real Life, black man/white woman pairs are very common and both racial groups have their own views about it, some positive, some negative, most neutral. White man/black woman pairs don't get as much attention (either positive or negative). There's a Double Standard in effect here dating back to American slavery: sexual relationships between female slaves and white men were (if not tolerated) left unspoken. The alternate relationship, of a white woman and a male slave, could result in death for the black male and the public shaming of the white female. Obviously, much of this has died down, though old biases still linger. These days, black women also have to contend with the stereotype that they're angry, unattractive man-haters, to the point that the news media actually runs stories about why unmarried black women are unmarried.

Please note that just like this trope's white/Asian counterpart, not every black/white romance falls under this trope. If the lovers just happen to be interracial and nobody makes a big deal out of it, then it is simply a mundane relationship. Only when it is seen as a controversial mixed marriage and/or one of the lovers express an extra attraction to their partner's skin tone is the trope in effect.

The Trope Namer comes from Blazing Saddles. It's also worth noting that the affection isn't one-sided in the least. There are plenty of white women on the prowl, wondering if what they heard is true. And you know what they say after that. This trope used to be nicknamed Jungle Fever, until Spike Lee made a film deconstructing the term.

The gender inverted version of this trope is Black Gal on White Guy Drama.

Examples of Where Da White Women At? include:

Leonard: "Where are all the white women at?"
Jeff: No Leonard! There are no white women here!"

Sophia: There's nothing romantic about it -- I've never even thought of him that way. Which is surprising, because I've always wondered about that particular myth.
Rose: What myth?
Sophia: You know... about black men... in the bedroom?
Rose: Oh... is that a Greek myth?

Dad: Gosh, Tony. I've got to tell you... you're a pleasant change from the usual riff-raff Susan usually brings home.
Susan: (furiously) Dad! He's not armed!

And they gone keep calling and trying / But you stay right girl / But when you get on he leave your ass for a white girl.

"Champagne Wishes, thirty white bitches..." from "So Appalled"
"Had a few white girls..." from "HAM"

"I am one, sir, that comes to tell you your daughter and the Moor are now making the beast with two backs!"
"Even now, now, very now, an old black ram / Is tupping your white ewe!"