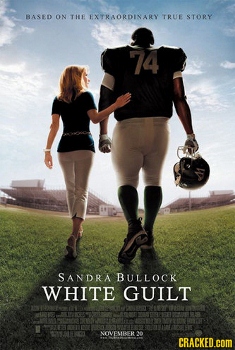 If Movie Titles Were Honest

"Is this one of those movies where the rich, benevolent white family teaches the black kid stuff like how to use a fork?"
—Internet commenter about The Blind Side

This trope is about a plot where an ordinary white person meets an underprivileged minority character, takes pity on the other character's plight, then selflessly volunteers to become a tutor, mentor, or caretaker to make things better.

This is a sister trope to Magical Negro, but is not a direct inversion of it. While a Magical Negro is depicted as a supporting character to the protagonist, the rescuer is the protagonist in a White Man's Burden story. The white character is the one who gets all the Character Development while the minority character's main purpose will be to advance that character development. The focus of a WMB plot will be on the white character's saintliness rather than the minority character's journey. And while many Magic Negros are depicted with supernatural or otherworldly abilities, the Samaritan in a White Man's Burden story will almost always be an ordinary person, to make it easier for the audience to identify with.

White Man's Burden movies are frequently created as Oscar Bait. Can easily induce Narm, Glurge, Tastes Like Diabetes, and/or an Anvilicious Broken Aesop or Warped Aesop in the hands of a poor creator. Save Our Students plots frequently involve this trope.

This trope has nothing to do with the 1995 film White Man's Burden.

Examples of White Man's Burden include: