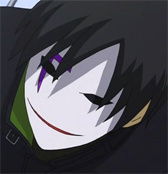 Masks are spooky: they dehumanise, they make a dangerous inhuman inner being visible. White masks occupy a special place. They have a long history in several cultures. Being white, they are blanker and scarier, offering nothing for the eye to hold on to. And look like skulls.

Sometimes our imagination will dwell on what is under the snow-pure mask: ghastly disfigurement? Nothing at all?

Bonus points if the rest of the character is dark to accentuate the mask. Being white it'll show bloodstains starkly.

This trope is fairly widespread in Anime and Manga. Compare Cool Mask. Sometimes doubles as a Mask of Power. Subtrope of Malevolent Masked Men.

See also: The Blank
Examples of White Mask of Doom include:

Retrieved from "https://allthetropes.org/w/index.php?title=White_Mask_of_Doom&oldid=1890468"
Categories:
Cookies help us deliver our services. By using our services, you agree to our use of cookies.