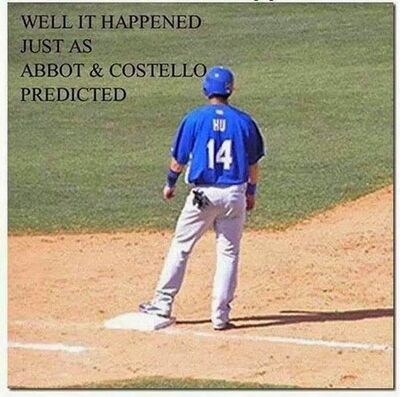 A comedy scene where the proper names of persons, places, or things sound like lexical parts of speech, pronouns or exclamations, such as Hu, Watt, Mee, Yu, etc. Usually one character will describe a situation using these terms solely as names, while another character uses them constantly as pronouns, and gets increasingly bewildered. An example would be something like:

This is named from a Vaudeville routine regarding baseball which, while performed by numerous comedians over the years, is today best known as Abbott and Costello's "trademark" sketch.

Abbott and Costello used variants of the routine in much of their comedy. In addition to baseball, there was their commercial for "Hertz U-Drive" ("If it hurts, you drive!"), shipbuilding: "What's that over there?" "That's a hull of a ship",[1] and other baseball players: "The bat was made for Slaughter" "Ain'tcha got any bats made for baseball?" This could expand into a Hurricane of Puns: "to make money loafing, you have to really knead the dough."

Occasionally characters have this as a running joke about their name.[2] Slightly more serious versions may use this as a form of loophole or Prophecy Twist: That No Man of Woman Born may slay you is little comfort when Mr. Noman from the village of Womanborn shows up at your door looking for blood.

See Chain of Corrections for a related trope. Sometimes overlaps with Henway. A "The One With..." title can result in something similar.

Examples of Who's on First? include:

Their interlocutor quickly resolves the confusion.

For the rest of that book and on at least one other occasion, Marco's dad refers to this friend of Marco's by the name No.

It goes on like that for quite some time.

Retrieved from "https://allthetropes.org/w/index.php?title=Who%27s_on_First%3F&oldid=1927487"
Categories:
Cookies help us deliver our services. By using our services, you agree to our use of cookies.