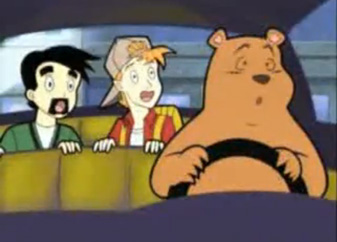 Oh my God, Bear is driving! How can this be?!

The characters are in a larger vehicle and the driver comes back to where the passengers are in order to have a conversation, leading to the obvious question of who is driving now. Once the you-know-what has been hung, the vehicle crashes. Can also happen if an animal (such as a bear) is revealed to be driving, or a person who Drives Like Crazy.

Examples of Who Is Driving? include: