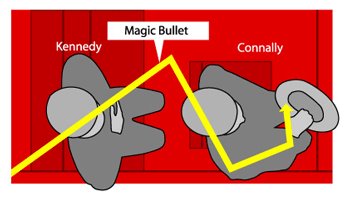 Americans love a Conspiracy Theorist, and no good show is complete without some theory as to who really offed the 35th President of the United States, John F. Kennedy. The Mafia, the Russians, LBJ, Nixon, the FBI, the Cigarette-Smoking Man, space aliens, some lone nut with a gun, additional gunmen, the crew of the Enterprise NCC-1701, Waldo, a time-displaced version of himself, the Comedian, Your Mom, all of the above at once—the number of variations on this theme, combined with the effect that it had on the American psyche, have made it a fertile ground for TV, book and film plots since the day Kennedy got shot. A good topic for a Seinfeldian Conversation. Frequently played for humor.

Incidentally, preventing the Kennedy assassination, or finding out who really did it, seems to be the second-biggest pastime of time travellers (the biggest being causing that of a certain other historical figure). This may be the best evidence to demonstrate that there is no such thing as time travel: If time travel were possible, there wouldn't be room on the grassy knoll for a second gunman.

Truth in Television, as this is a perennial topic for conspiracy theorists, involving such controversies as the "magic bullet" (see page image) and the "grassy knoll", aided by the murder of Lee Harvey Oswald by nightclub owner Jack Ruby (who was alleged by some conspiracy theorists to have mob ties) two days afterwards on live TV.

No real life examples, please; while the actual motives and events behind Kennedy's death remain hotly disputed, the 'Lone Gunman' theory remains the official version of events and, barring certain inconsistencies, the most complete and accurate according to general consensus. We probably don't need to go any further than that.

Examples of Who Shot JFK? include:

Retrieved from "https://allthetropes.org/w/index.php?title=Who_Shot_JFK%3F&oldid=1887389"
Categories:
Cookies help us deliver our services. By using our services, you agree to our use of cookies.