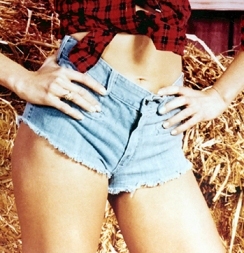 Hot pants, mini shorts, daisy dukes? Whatever you call them, it can be a great way to Show Some Leg without having to worry about a Panty Shot. This is mostly a female trope, but there have been a few males to slip in. This trope became popular in real life around the mid-1950s, and even though it has never been at the height of fashion it's never really gone away either.

For added sexiness, combine with Zettai Ryouiki, She's Got Legs. If you don't want anyone seeing your legs, just add tights.

Examples of Who Wears Short Shorts? include: