Jump to content
(Redirected from Why Don't Ya Just Shoot Him) 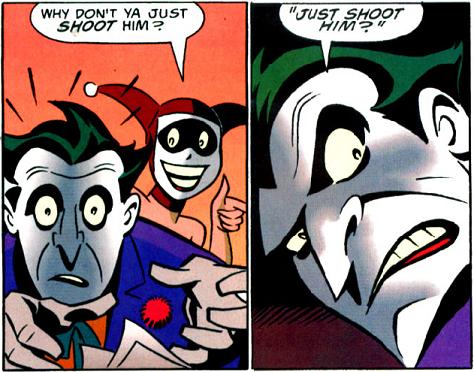 Villains (and occasionally darker Anti-Heroes) frequently find themselves in conundrums that could easily be solved by finding the right person and shooting them. But rare is the villain who actually takes this direct approach.

There may or may not be some in-story justification for this failure to take the direct approach. However, the Doylist explanations generally boils down to the fact, if he did just shoot him, then the story would be much shorter and would end with the bad guys winning.

If you, the viewer, are wondering why someone won't just shoot someone else, Headscratchers is the place to ask.

Pages in category "Why Don't You Just Shoot Him?"

The following 9 pages are in this category, out of 9 total.

Media in category "Why Don't You Just Shoot Him?"

Retrieved from "https://allthetropes.org/w/index.php?title=Category:Why_Don%27t_You_Just_Shoot_Him%3F&oldid=1926222"
Categories:
Cookies help us deliver our services. By using our services, you agree to our use of cookies.