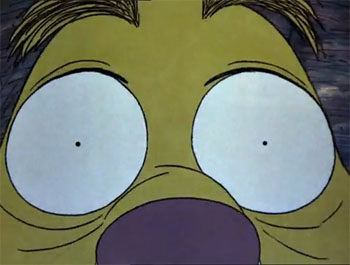 Do you think that, just maybe, he's scared?

A sign that a character is absolutely terrified is if the eyes are wide open and the irises and pupils are shrunken to minimum, or even absent. Gives the impression that the character is screaming inside, even if they are silent with shock. It comes across as striking and, if done well, can even be Nightmare Fuel or its high octane equivalent. Often a warning sign that the character is about to Freak-Out. May also involve Tears of Fear.

Can also happen if a character is injured. It's a good way of illustrating shock.

Bonus points if the scene cuts away to a Scream Discretion Shot.

It can also happen if a character is very, very angry.

If this only happens to one eye, it is a case of Mad Eyes.

See also Oh Crap, and Open the Iris for the trope's physical opposite.

A case of Artistic License: Biology: the pupil inside the iris can dilate (expand) during moments of fear, but the iris itself does not change size. Regardless, most artists consider it an Acceptable Break From Reality (see Open the Iris for reasons why).

Not to be confused with Sphere Eyes.

Examples of Wide Eyes and Shrunken Irises include:

Retrieved from "https://allthetropes.org/w/index.php?title=Wide_Eyes_and_Shrunken_Irises&oldid=1901287"
Categories:
Cookies help us deliver our services. By using our services, you agree to our use of cookies.