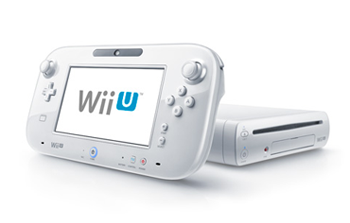 The Wii U is Nintendo's successor to the Wii, released in November 2012 in North America and Europe, and December in Japan. It was followed by the Nintendo Switch.

What distinguishes Wii U from Wii is that the controller itself, called the Wii U GamePad, has a 6.2 inch (15.7 cm) touch screen on it [1], and it allows players to play their video game while someone in their room watches TV. In addition, players can use both the Wii U controller and the TV itself to interact further with video games. When not playing games, it can even function as a TV remote control through the press of a button.

Wii U is backward compatible with other Wii controllers and accessories and Wii games, but not Game Cube games (though such have been confirmed for the Virtual Console). The controller itself can actually stream video chat, and can even be used to share videos and other media. The controller also supports near field communication (NFC) common in mobile devices, allowing for wireless interaction with figurines and cards as well as microtransactions with credit cards that utilize NFC support (incidentally, Nintendo originally planned on the Wii having such a touch screen controller, but they instead went with motion controls while saving the touch screen for the Wii U).

The Wii U has 8GB or 32GB flash memory compared to the 512 MB on the Wii. In addition to using SD cards, a hard drive can be connected via one of the four USB ports. The Nintendo-proprietary game discs themselves can contain 25 GB of memory [2].

The Wii U is more powerful than the Xbox 360 and Play Station 3 [3], and features HD compatibility equating to a resolution of 1080p (Actual resolution. The 360 upscales 720p), though it should be pointed out that any and all footage shown of the Wii U during E3 2011 (except that of the tech demos and Killer Freaks From Outer Space) was actually footage taken from 360 and Play Station 3 games. According to Shigeru Miyamoto, he could not say for sure if the hardware will outperform the Play Station 3 and 360; though Electronic Arts, Crytek, and Gearbox Software have confirmed the final developers' kit easily can. The system comes with 2GB of RAM -- 4 times as much as the Xbox 360 (512 MB), 8 times that of the PS3 (256 MB), and 32 times the amount of the Wii (64 MB).

Nintendo had also announced plans to bring their online efforts up to par with their competitors, calling this revamped network the Nintendo Network, which will also eventually encompass the Nintendo 3DS. This new online setup will, instead of forcing developers to adhere to a unified online variant, allow developers to create their own setup. Nintendo themselves will go with an individual account system, which will make management of different users easier. Plus, the cumbersome friend codes will be a thing of the past.

There is also a new user interface/social network called the Miiverse, which is the main menu for the system. Miiverse shows your personal Mii; any Miis on the system; Miis of your friends; and crucially, Miis of other people playing games you own. The Miiverse even lets you see what friends are doing, even if you don't have the same games as them. Through the GamePad, the player will be able to communicate with any of these Miis via messaging, screenshots, or simple doodles. This also expands to otherwise single-player or offline-only multiplayer games, and the messaging aspect itself will be cross-platform -- Nintendo plans to integrate Miiverse into the 3DS, and will also release Miiverse applications for PCs and smartphones. Similarly to the 3DS, Miiverse can be brought up at any time during gameplay, with gameplay itself suspended.

There are a few problems, though. Even though the Wii U supports two simultaneous GamePads, they are so expensive that Nintendo will be focusing on single-controller possibilities for the time being. All currently-displayed multiplayer games give one player a GamePad and the rest Wii controllers (or the Wii U Pro Controller). Also, as with the previous two Nintendo systems, it does not support DVD or Blu-Ray playback, but Nintendo is working with companies such as YouTube and Hulu to provide video content.

The console has gained much attention and praise from a few "hardcore" developers for its graphics and interesting controller mechanics. The makers of some high-end Game Engines originally pledged support for it, namely, Unreal Engine 3 from Epic, CryEngine 3 from Crytek, and hinted support for Frostbite Engine 2.0 from EA. Nintendo has stated that they will focus on core gamers first this time around.

The system is a step above the PS3/Xbox 360 generation, but below the PlayStation 4 and Xbox One. It did not gain the audience that the also underpowered Wii did, and many console developers have left it; currently it stays alive based mostly on Nintendo-exclusive properties, much like previous unsuccessful Nintendo systems did.

Retrieved from "https://allthetropes.org/w/index.php?title=Wii_U&oldid=1744469"
Categories:
Cookies help us deliver our services. By using our services, you agree to our use of cookies.