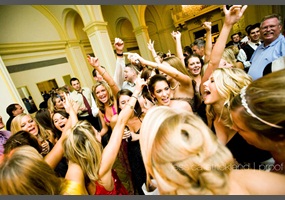 A mainstay of the classic teen comedy movie, but usually seen at least once in every Sitcom that has a teenaged character, this is the inevitable result of mixing one or more teenagers with a house devoid of parental figures. It almost always results in wall-to-wall teens, loud music, underage drinking, and property damage. (And, in R-rated movies, a lot of sex in the bedrooms and/or bathrooms.) Sometimes this is by design, and sometimes a small party for a couple of friends spirals completely out of control.

A popular variation of this is that the host only invited over two or three friends and the party just shows up out of nowhere. Someone they did invite brought one more person, and so did another. Then someone they never met shows up at the door. Fast forward ten minutes and a college football team shows up with a keg and there's somehow full disco lighting in the living room. The host will still get in trouble for this, and the show may still play it as an Aesop. Another variation is when two teens live in the same house, and one plans a party without consulting the other, who has to study for a test or do something else where peace and quiet is necessary. The second teen usually will not find out until they come home to see the party already underway.

The Wild Teen Party usually experiences at least one, and often more, of the following complications:

The party then ends in either of two different ways:

However it runs, with whatever complications and ending, the Wild Teen Party usually ends in An Aesop about responsibility, maturity, and—if the hosts were caught—telling the truth to one's parents.

Truth in Television, of course -- as any news reporter who wants to take a pop at Facebook will tell you.

Examples of Wild Teen Party include:

Retrieved from "https://allthetropes.org/w/index.php?title=Wild_Teen_Party&oldid=1933412"
Categories:
Cookies help us deliver our services. By using our services, you agree to our use of cookies.