Everything About Fiction You Never Wanted to Know.
(Redirected from Wild West Cowboys of Moo Mesa)
Jump to navigation Jump to search 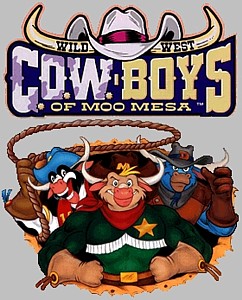 Left to right: The Cowlorado Kid, Marshal Moo Montana, and The Dakota Dude.

Wild West C.O.W.-Boys of Moo Mesa. A show most young'uns assume is only the product of the drug-addled minds of us that were born in the 1970s and 1980s, but was quite real. It was a Saturday Morning Cartoon that aired on ABC starting in 1992 created by comic artist Ryan Brown (who inked several dozen issues of the Teenage Mutant Ninja Turtles comics and designed several figures for the toy lines, which probably explains a few of the themes of the show). The show focused on the exploits of three anthropomorphic cows who were in fact cowboys (har har).

See, in the 19th century, a random comet crashed into the Southwestern United States causing a massive transformation among not only the land, but the animals as well, turning them into intelligent versions of themselves that decided to create their own city, Moo Mesa. In this city, they basically acted as humans of the Old West did, and as such, there were good guys and bad guys....the former being the trio of C.O.W. Boys (Marshall Moo Montana, The Cowlarado Kid, and Dakota) and the latter being composed of the city's shady politician Mayor Bulloney, and Sheriff Terribull who took on the alias of the Masked Bull, a criminal mastermind.