Everything About Fiction You Never Wanted to Know.
(Redirected from Will and Grace)
Jump to navigation Jump to search 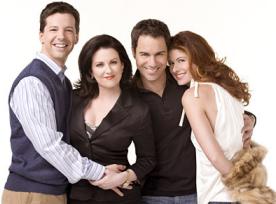 From left to right: Jack, Karen, Will and Grace

A domestic Sitcom about a gay man, Will Truman (Eric McCormack), and a straight woman, Grace Adler (Debra Messing), who are best friends and eventually roommates. The show chronicles the changes that their relationship undergoes as Grace dumps her fiancee and Will breaks up with Michael, his long-term boyfriend. They are also joined by Will's "friend" Jack McFarland and Grace's "assistant", the perpetually drunk millionaire Karen Walker.

The show is quite polarizing, it seems: it's critically acclaimed for its humor and fast-paced dialogue, but it's also highly criticized for the Unfortunate Implications that come along with poking fun at or accidentally reinforcing stereotypes about the gay community. Therefore, Your Mileage May Vary on the content of the show.

For all its flaws, the show actually does pull off some good dramatic moments and genuinely funny dialogue and had a rather sweet series finale after eight seasons.

And it's also worth noting that Will & Grace is one of the few sitcoms in which all the four main characters won an Emmy, which is remarkable (the only other two on record are All in The Family and The Golden Girls, so they're in good company)!

Tropes used in Will & Grace include:
Retrieved from "https://allthetropes.org/w/index.php?title=Will_%26_Grace&oldid=1485473"
Categories: