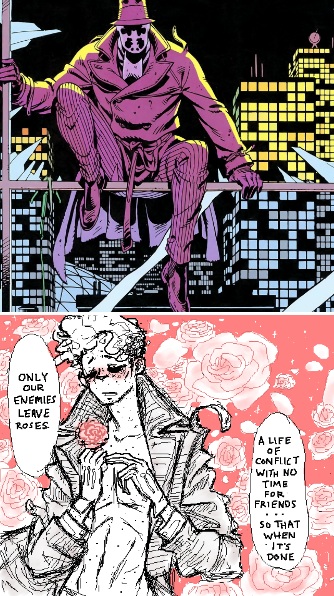 One of these Rorschachs is not like the other.

So you have a male character who has Ho Yay with some other male character. He may be a Badass Big Guy in Canon, but in Fanon it is a different story. Once the Fanfic writers get to work, his characterization changes to a submissive Non-Action Guy. Congratulations. You've just seen Wimpification at work.

This is the male Fanfic equivalent to Chickification in which a male's character becomes more physically and emotionally vulnerable in order to pair them with a canon character of the same sex. This can be Hurt/Comfort Fic, but there is one difference. In a Hurt/Comfort Fic, the plot hinges on breaking a character with traumas so that another character can comfort them, often leading to a pairing. The character's characterization changes, often inexplicably or with only a Hand Wave, and the change is by definition for a pairing. Additionally, there often is no comfort, with the Wimpification instead paving the way for their becoming submissive to a partner who acts as the Seme.

In worst cases, the character is changed into an over-the-top feminine stereotype, which, if applied to a female character, would be deemed incredibly sexist.

Of course, Tropes Are Tools and this may be done well (or at least subtly enough so as not to interfere with the story) if, rather than creating new weaknesses for a character, the fic author simply exploits canonically existing weaknesses.

Anime fans refer to this process as ukefication (see Uke).

Subtrope of Out of Character. Often causes Badass Decay.

Fanfic based on Anime and Manga

The fact that canon does establish him as sexually inexperienced compared to Greece, who happens to be One Head Taller than him, doesn't really help. The better Greece/Japan fanwriters recognize that, sexual disparities aside, the two actually have a pretty equal relationship in canon with Japan actually being technically older than Greece (if you consider that Greece represents only the Hellenic Republic due to his mother literally being Ancient Greece), and that even if Japan's Moe traits tend to be enhanced when he's with Greece, he'd still have a touch of Inscrutable Oriental or at least a 'far more likely to quietly hide his emotions than become a blushy, weepy mess over them' vibe to him; the poorer fanwriters...don't.

The assumption of physical abuse probably stems from the fact that the spirit isn't exactly careful with Bakura's body (stabs him with the spikes of his ring, stabs his hand on a tower, stabs himself with a knife...) However, once Bakura's life actually was in danger (at the end of his duel against Yugi), he gave up victory and promised to protect him because he needed the body. In addition, while he was quite careless, he never really "punished" Bakura, or hurt him out of pure sadism, as fanfiction would like to make you believe. And given that Bakura got over it quite quickly and didn't turn into a shaking mess at the end of the series, it can be assumed that most of the time, he was rather "asleep in his subconscious", instead of being forced to witness the spirit's deeds.

Fanfic based on Comic Books

It's pretty easy to tell which side a Steve/Tony slashfic falls on by figuring out whether the fic's implication is a) Tony briefly dropping his canon control-freak persona is a huge, jaw-dropping deal that shows how special Steve is to him, or the fic's implication is that b) Tony must have a natural Uke-ish personality all the time (inexplicably hand-waving his canon control freak tendencies). Choice b) obviously requires a lot of canon warping.

Fanfic based on Film

Fanfic based on Literature

Fanfic based on Live Action TV

Fanfic based on Video Games

Fanfic based on Web Original

Fanfic based on Western Animation

The entire Stan/Kyle dominance thing is also a tad strange, given it is true that, taking their personalities into account (Stan as the sensetive push-over and Kyle the blunt and stubborn smart guy), the two seemingly managed to switch roles in the eyes of the fandom. While some notice this and switch it around, they are in the small minority of the shipping community.

Fanfic based on Real Life

Retrieved from "https://allthetropes.org/w/index.php?title=Wimpification&oldid=1903605"
Categories:
Cookies help us deliver our services. By using our services, you agree to our use of cookies.