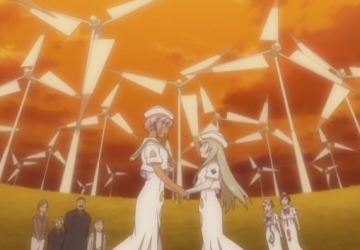 Wind turbines. When they appear they are mostly the horizontal type with three long, rotating blades. They can be an expression of environmental themes, and a symbol of old technology—windmills—meeting modernity, in that they make electricity.

Examples of Wind Turbine Power include:

Retrieved from "https://allthetropes.org/w/index.php?title=Wind_Turbine_Power&oldid=1760719"
Categories:
Cookies help us deliver our services. By using our services, you agree to our use of cookies.