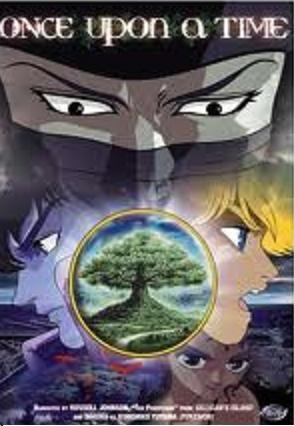 "Oh Guardian Tree of Life, bring us health and happiness"

The world of Windaria is split into three distinct cultures: the kingdom of Lunaria is based on the coast and lives off the sea, The kingdom of the Shadowlands which is based on industry, and "The Valley", where farmers live and plow. The varying interests of these three regions drives the plot. As the story begins, Lunaria and Shadowlands are at odds because the former is denying fresh water to the latter and are negotiating for its renewal, Izu and Marin are taking their produce from The Valley to the Lunarian market, and a figure in a mask has a mysterious plan for everyone.

Also called Legend of Fabulous Battle Windaria and Once Upon a Time, this is a Japanese animated film produced by Kaname Productions and Idol. The film was directed by Kunihiko Yuyama and written by Keisuke Fujikawa. It was released theatrically in Japan on July 19, 1986. In 1987, Harmony Gold licensed Windaria for release in the United States, changing the title to Once Upon A Time and trimming the movie from its 101-minute running time to 95 minutes. The English version included a new script, an altered plot, scenes switched around, violent and adult-oriented scenes removed, and the entire cast given Western names. The uncut Japanese version has never been officially released in this region; however, before DVDs and the popularization of anime in the States the un-cut version did make the SF convention circuit and was available in the US on laserdisc.

It's based on a novel of the same name, authored by Keisuke Fujikawa, the film's screenwriter. In the Japanese version of Windaria, portions of the novel are read over the beginning and ending of the film as narration by the protagonist.

Tropes used in Windaria include:
Retrieved from "https://allthetropes.org/w/index.php?title=Windaria&oldid=1770776"
Categories: