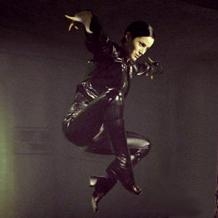 Chop Sockey, assisted by the fact that the actor is tethered to the ceiling.

A (comparatively) easy way to make a fight scene more impressive is to use fine wires to support the actor during acrobatics that would not be possible for a normal human: long lateral jumps, jumping "off the air", being thrown back by an explosion, or even hanging suspended. Wires can also be used to slow down an actor's movement without the undesirable side effects of Overcranking.

Wire Fu is an important device of the entire Toku genre and of Wuxia.

Also called "Wirework" (though that term is more general; "Wire Fu" usually refers only to the use of wirework for fight scenes).

Expensive and time-consuming, it is often now replaced by computer-generated effects.

Examples of Wire Fu include: