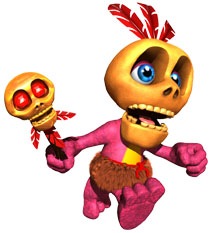 The main distinction from The Mentor is the Witch Doctor is not given respect. He's arcane, mysterious, and downright creepy even by the standards of his environment; That's why he lives well away from everyone else and doesn't wash much. His hut is filled with dried and pickled remains of unpleasant and unidentifiable critters. If he doesn't have explicitly magical powers, often the Witch Doctor is just a wetware version of the Mad Scientist.

You go to him because he might have a better plan or advice than other rubes, but no one wants to actually talk to him. If he's smart, he knows it and will remind you frequently. Unlike the Mentors, he's concerned with your quest and possibly be a little fond of you, but perhaps not your particular survival. He is usually completely frank and your success is all he really seems to be rooting for.

Even in recent times, most Witch Doctors have a semi-obvious ethnic derivation; the most tolerated currently is Jamaican/Caribbean (normally Haitian) and most will have a Voudoun slant. Interesting enough, the "surly wizard" stereotype may be the European equivalent to the Witch Doctor.

A Witch Doctor can also be a villainous character, what with voodoo getting the treatment it usually gets in Hollywood. If that's the case, expect his general griminess to be played for creeps rather than laughs. Other times, they may be an example that Dark Is Not Evil.

This is a Cyclic Trope, as it sometimes become unpopular to depict female European-style witches this way. One way around this is to have an updated, "modern" witch around as the main character, so old-fashioned witches comes off as cranky traditionalists. Then again, sometimes the "modern" witch turns out to be a poseur spouting the New Age equivalent of Techno Babble, and it's the traditionalist witches who know their stuff.

Examples of Witch Doctor include:

Retrieved from "https://allthetropes.org/w/index.php?title=Witch_Doctor&oldid=1560554"
Categories:
Cookies help us deliver our services. By using our services, you agree to our use of cookies.