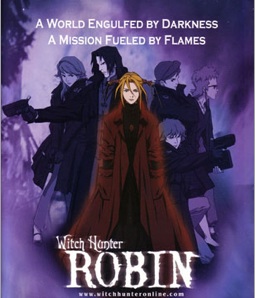 The adventures of a group of people who hunt "witches", that is, people born with specific genetic superhuman abilities that many people associate with magic. It's implied in the opening credits' Fauxlosophic Narration that they aren't just a Witch Species but may have been a culture or civilization that ruled over man until deposed or self destructed. The protagonist of the series is Robin Sena, a witch herself with the ability to conjure and control fire.

The main themes of the series involved the moral responsibility that these powers imply, and how many witches let their great power drive them to insanity. Other themes were isolation and persecution; witches have a hard time assimilating and living among humans while controlling their dark urges. In the second season it's revealed that even innocent witches all live in fear of being killed or disappeared by the likes of Robin's witch-hunting group if their powers are discovered. Robin herself battles with the fear she will one day become drunk on her power and be hunted by her friends as a witch.

--Robin: It's like being pasteurized.
—Haruto: You mean "put out to pasture".