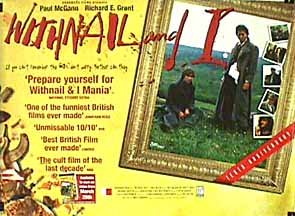 "We've gone on holiday by mistake!"

Withnail: [after drinking an ounce of lighter fluid] Have we got any more?
"I": [shakes his head]
Withnail: Liar. What's in your toolbox?
"I": No, we have nothing. Sit down.
Withnail: Liar! You've got anti-freeze!


"I": Bloody fool! You should never mix your drinks!
—The titular characters take their first drink and pretty much set the tone for the whole movie.

Made in 1987, Withnail and I is a semi-autobiographical classic black comedy set in the end weeks of 1969. Written and directed by Bruce Robinson, who lived it, and starring Richard E. Grant as Withnail, a quasi-homosexual, messed-up, flamboyant alcoholic, and Paul McGann as Marwood (or I, as he's never named in the actual film), his slightly more sane and sensible friend. Both are seriously unemployed actors (and in Withnail's case, almost entirely unemployable) living in squalor, who decide to get away from it all with a holiday in the countryside by way of borrowing a cottage belonging to Withnail's equally flamboyant Uncle Monty.

Trouble is, everything goes wrong; they're totally incapable of looking after themselves rendering the cottage a cold, dark, borderline inhospitable shack (though once the owner arrives he seems able to make it quite homely in a few short hours...). They can't find any food, it won't stop raining, the locals are surly and unwelcoming, a local poacher takes exception to Withnail and promises violent retribution, and as if that wasn't enough, Uncle Monty makes a surprise appearance, with amorous intentions towards Marwood....

The film is as famous for its obnoxious fanbase (besides an evergreen popularity among university students, often people who see it will quote it whole) and Robinson's mistreatment from Handmade Films as it is for its hilarious lines and one of the saddest endings in a comedy film. And you could also say it's one of the few films where the slashers aren't just wishfully thinking, as the 'love' between the two leads has been picked up by many.

Tropes used in Withnail and I include:

Marwood "You never discuss your family, do you?"
Withnail "I told you, we're incompatible. They don't like me being on stage."
Marwood "Then they must be delighted with your career..."
Withnail: Why do you say that?
Marwood: You so rarely are.

Withnail "I don't know what my fr... acquaintance did to upset you but I can assure you it's nothing to do with me. I suggest you both go outside and discuss it sensibly in the street..."

Danny: "Politics, man. If you're hanging onto a rising balloon, you're presented with a difficult decision - let go before it's too late or hang on and keep getting higher, posing the question: how long can you keep a grip on the rope?"

"Even a stopped clock gives the right time twice a day. And for once I'm inclined to believe that Withnail is right. We are indeed drifting into the arena of the unwell."

"Bastards! You'll all suffer! I'll show the lot of you! I'm gonna be a STAAAAAAAAAAARRRRR!"

"I'm a trained actor REDUCED to the status of a bum!"

Withnail: "Listen, we're bona fide! We're not from London. Could we have some fuel and wood?"

"I mean to have you, even if it must be burglary!"