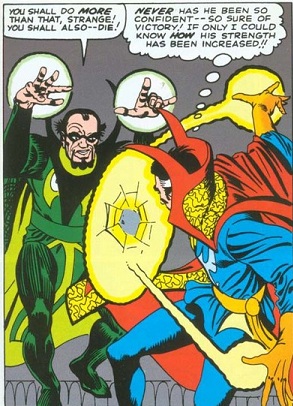 If both the heroes and villains have a wizard on their side, you can be assured this will happen at some point. Usually at or near the story's climax, probably because such a battle tends to be visually impressive. Of course, if the main protagonist of the series is the sorcerer, then it happens all the time. The battle doesn't have to be between enemies; it can occur between friends or rivals, a master and his apprentice, and so on.

Sometimes, there are specific rules that have to be followed in the duel, especially if both characters belong to a special caste or organization. Of course, if one of the participants is dishonorable, expect him or her to cheat.

If such rules prohibit direct attacks on each other, or the work's demographic would make violence inappropriate, or the duel is just more of a friendly rivalry than an all-out fight, the participants may limit themselves to ostentatious spell contests instead; "any fish you can summon, I can summon bigger", if you will. This kind of duel goes right back to The Bible, if not earlier.

Curiously, one trick rarely used is to magically silence the opponent. This may be because it would make the duel too easy...or because an unspoken assumption of the setting is that it would not actually work. (Not all magic depends on dramatic incantations, and as long as the caster isn't physically prevented from speaking in the first place an invocation's effectiveness rarely seems to be depend simply on how loud it is.) One exception is in Role Playing Games, where Silence spells are fairly common.

A subtrope of Duel to the Death, though it doesn't necessarily have to be fatal, and frequently ends when one side (for any reason) is unable to continue the duel. If the magic users are specifically using Voluntary Shapeshifting spells to get the upper hand, it's a Shapeshifter Showdown.

Examples of Wizard Duel include: