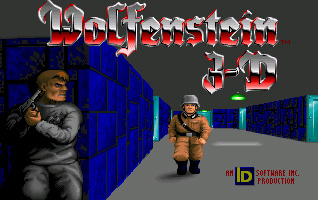 Often regarded as the first true First-Person Shooter. Although very primitive entries in the genre had been available since 1973, it's definitely the Trope Codifier and pretty much any modern FPS traces its gameplay's descent back to it. Wolfenstein 3D was a shareware game developed by Id Software in just two months, and published by Apogee Software in May, 1992.

The story is simplicity itself: American soldier B.J. Blazkowicz is imprisoned in the Nazi prison Wolfenstein, and must walk through endless corridors, find keys and shoot Nazis until he escapes. Following chapters, which could be mail-ordered, had somewhat more out-there storylines, with Operation: Eisenfaust requiring you to thwart a Nazi doctor performing horrible biological experiments, and Die, Fuhrer, Die! allowing you to take down Adolf Hitler himself. As he attacks you in an armored battle suit with quad-miniguns. There's also a prequel trilogy of episodes, entitled the "Nocturnal Missions", in which B.J. assassinates a Nazi chemical weapons scientist (A Dark Secret), uncovers his plans for a chemical war (Trail of the Madman) and finally kills the general carrying it out (Confrontation).

Wolfenstein 3D was also released for the SNES, with all swastikas and other Nazi imagery removed, the attack dogs turned into giant rats, and Hitler modified to be just a "generic" dictator (by shaving off his mustache and calling him Staatmeister). Wisdom Tree also produced an unlicensed Christian-themed modification (Read: level-for-level copy) based on the SNES port, Super 3D Noah's Ark, which changed the guns into a fruit-shooting slingshot and the enemy soldiers into animals. Rumor has it Apogee willingly let them use the engine, being angered at the Wolf 3D's bowdlerization at Nintendo's hands.

Now online to celebrate its 20th anniversary. Get Psyched! (and ruin your productivity...)

Get Psyched!:
Retrieved from "https://allthetropes.org/w/index.php?title=Wolfenstein_3D&oldid=1680185"
Categories:
Cookies help us deliver our services. By using our services, you agree to our use of cookies.