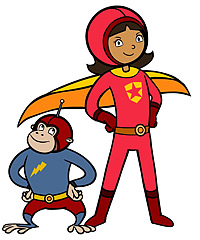 WordGirl is an animated television show on PBS. The title character is a superhero who fights crime with her powers of literacy as well as her powers as a Flying Brick. The show is an Affectionate Parody of the superhero genre, and uses writers from comedy sketch shows like Saturday Night Live, plus actors known for adlibbing ability, in hopes of making a show as entertaining for adults as it is educational for kids.

WordGirl uses her great vocabulary to fend off villains such as The Butcher, Dr. Two Brains, Granny May, Tobey, and Chuck The Evil Sandwich Making Guy. She never reveals her alter-ego to anyone, including her own family. She and Huggy use their crashed spaceship as a secret hideout.

Tropes used in Word Girl include:
Retrieved from "https://allthetropes.org/w/index.php?title=Word_Girl&oldid=1881430"
Categories:
Cookies help us deliver our services. By using our services, you agree to our use of cookies.