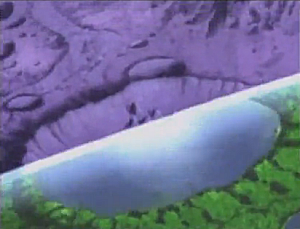 They said it was lunacy, investing in Mordor real-estate. Well, who's rich now?!

The good counterpart to the World-Wrecking Wave, the World-Healing Wave magically repairs a setting of any and all destruction done to it by evil forces. It can have a lot of different causes: the heroes may be returning the Cosmic Keystone to its proper place/owner, the Fisher King is healed, the God of Evil is slain and their Walking Wasteland effect is undone, the players reset the computer system, or a God of Good uses a massive display of Fertile Feet and Green Thumb to restore the place.

For extra warm and happy feelings, any people, plants, animals, and structures killed and destroyed may be brought Back from the Dead and/or magically repaired.

Needless to say, a World-Healing Wave is a HUGE Deus Ex Machina that can remove all worry from a plot. "So what if the Big Bad killed Danny, burned down Troy and kicked Skippy? If the heroes succeed he'll be resurrected!" Which is why the heroes will likely have it as the objective of their entire quest, and it's usually limited to kid stories to provide expedient Disney Deaths. It can also be justified, if the Cosmic Keystone or what-have-you that caused this event really is that big a deal.

Examples of World-Healing Wave include: