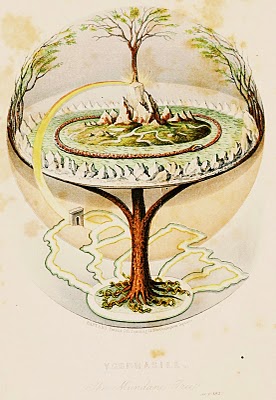 A gargantuan tree fills the sky. Usually situated in a breezy land of snow and ice or a sprawling forest or maybe even a green, green field. It can be seen from miles away...

This is a very old archetype, one that spans the ages and cultures. It has been called Yggdrasil, the Axis Mundi, and The Tree of Life among other names. Many works of fiction have embraced it quite thoroughly.

The Tree seems to represent the connection that all living things have. It is present when two people make a promise. It is also present just beyond life, where all souls come together. (So it can also represent Eternity.) If something happens to the World Tree, often a new one will be born from a seed; representing rebirth. Compare Ouroboros.

Of course, anything this spiritually significant is very popular to produce evil versions. Evil World Trees often pervert the concept of "oneness" by subverting promises and spiritual connection into absorbing everything into itself.

The World Tree may exist between worlds, with its roots in one and its branches in another. It may even be a Wood Between The Worlds. It's naturally a Genius Loci. See also The Tower.

The health of the World Tree is tied to that of the world itself; injuring it may have catastrophic consequences.

Examples of World Tree include:

Retrieved from "https://allthetropes.org/w/index.php?title=World_Tree&oldid=1743109"
Categories:
Cookies help us deliver our services. By using our services, you agree to our use of cookies.