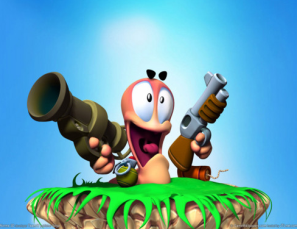 In the early 90s, bedroom coder and Amiga fan Andy Davidson decided to make an Artillery-style Turn-Based Strategy game with a large arsenal of outlandish comedy weapons and - for reasons known only to himself - warring annelids. Showing his game idea - Total Wormage - at a games fair, he caught the eye and imagination of games company Team17, who offered to develop the game. The result was Worms. With weapons ranging from the relatively sane Bazooka, Grenade and Shotgun to the bizarre Sheep, Banana Bomb, and the devastating Holy Hand Grenade.

The warring annelids were originally set to be Lemmings, for the first several years of the game's existence. Only when he started trying to sell the game to games companies did he change it from "LemArtillery" to something less copyright-infringing. Some versions of the game still mention "***Artillery" in the credits or title screen.

Worms games throughout the years have included:

The most popular version is probably Worms Armageddon, which is still being patched and modded today to keep compatibility with modern machines despite its age.

Tropes used in Worms include:

Then came the nuke and the disease tumbling down
If the bug didn't get you, you probably drowned
But the Worms battled on, through hunger and pain
Living to fight, just a victor again

It was there he saw his﻿ friend Spadge, stood upon a bridge.
But another worm had also seen him, and aimed to have him dead.
Boggy called to Spadge, but Spadge didn't hear!
He never knew what hit him, as he flew into the air.
It﻿ was all too much for Boggy, as he watched his best friend die.
His heart filled with rage, and he gripped his rifle tight.