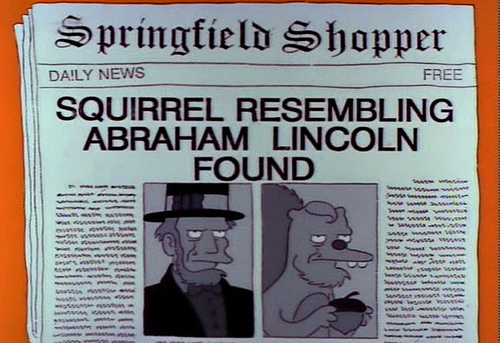 "Russia and the United States are at war. Missiles have been fired by both sides. Washington and Moscow are in flames. Details on these and other stories in just a moment, but first, this word about hair care."
—George Carlin

Exhibited by entire newspaper editing teams at our heroes' hometown papers, the Worst News Judgment Ever gets relatively mundane news stories placed in prominent locations (i.e., A1, above the fold, bannered across five or six columns, and with an overblown mug shot). Our heroes have an easy time finding whatever they happen to be looking for, with the use of a Magical Computer that somehow is able to search .jpg versions of the page in question with imprecise, convoluted or irrelevant text strings. That's if they don't simply see the paper in the paper-vending machine; with that sort of placement, you don't even need to buy the paper—it's all in the giant-print headline.

Usually, the news judgment is so wildly overblown as to cause disconnection from the audience; you will rarely, if ever, see a Lampshade Hanging pointing out this ridiculous fallacy. (We'd all love to see a CSI where Catherine gets a puzzled look on her face and said, "Hmm, how come the acquisition of this small Las Vegas accounting firm isn't stuck in the business briefs on D-12?")

While improbable in the real world, the overplayed story in question usually provides our protagonists with a Red Herring.

On the other hand, if the main headline is earth-shattering enough, one may start to wonder why there are any other articles on the front page at all. When the main headline reads "Extinction of Humanity Imminent", then how in the heck is "New Petitions Against Tax" newsworthy?

In a comedy or an old movie, will manifest itself at the end of a Spinning Paper montage.

There is also an inverted version of this trope that is usually used intentionally for ironic purposes: an important story (often describing the events that occurred in the movie we've just seen) is shown stuck in a corner on the newspaper, while a vapid story (such as a celebrity scandal) sucks up the headline space. The paper is showing terrible judgement by emphasizing the wrong story. (Given, among other examples, the recent[when?] protest of MSNBC's Mika Brzezinski over having to lead with a Paris Hilton story when there were several more serious stories worthy of attention, this could be considered Truth in Television.)

This variant is almost always used as a commentary on society's preoccupation with meaningless gossip, but it is sometimes used to show that the world has virtually ignored a story that would have changed everything (such as proof of the existence of aliens, vampires, or similar). In this case, it's not so much bad judgement—the paper would have no way of knowing that the freak meteor shower was the remains of a destroyed alien invasion fleet—but probably still counts as an example of this trope because the audience knows that the small story is actually of critical importance.

Examples of Worst News Judgment Ever include:

Alfred: Batman may have made the front page, but Bruce Wayne got pushed to page eight.

Agent J: These are the hot sheets?
Agent K: Best investigative reporting on the planet. But go ahead, read the New York Times if you want. They get lucky sometimes.

Frank: I know your daughter, Hurley, had to transfer schools...
Mrs. Boyd: Shirley. My daughter's name is Shirley.
Frank: Oh, that is much prettier. Tom Brokaw called her Hurley.

"Well, everyone is talking about the Third World War which broke out this morning. But here on Nationwide we're going to get away from that a bit and look instead at the latest theory that sitting down regularly in a comfortable chair can rest your legs."

News Caster: We interrupt this program to give you an urgent report. It seems that the Domino Museum is holding an extremely boring exhibition on ancient Egypt. Apparently this qualifies as news. In other plot-related stories, Seto Kaiba is about to receive an important phone call.

On a lighter note, the president has been shot.

Kent: [grim] And those little kittens played with that ball of yarn, [despondent sigh] all through the night. [perks up] On a lighter note, a Kwik-E-Mart clerk was brutally murdered last night.