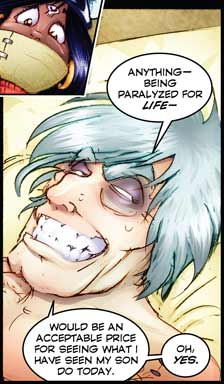 Fatherly pride is always worth it.

"Just so you know, I'm running a fever, I've got a nasty cough, and my sinuses are filled with something I can't even describe. And it was totally worth it."
—Tali'Zorah vas Normandy, Mass Effect 2, post-Relationship Upgrade

Every action has consequences. Some actions have particularly nasty consequences. Ones where you'll have to ask yourself after all is said and done, Was It Really Worth It?

For most fictional characters, the answer is yes. Especially if the end result is funny.

This Stock Phrase is usually said after a character does something that they really shouldn't have, but the opportunity was too good to pass up. Such as peeping on someone at the hot springs, beating up an annoying character, or anything else they could expect to have very bad consequences. But they don't care. Because it was Worth It.

See also Spoof Aesop, Was It Really Worth It?. If they probably won't be around to say this afterwards, an alternative is I Regret Nothing!

Examples of Worth It include:

Oracle: "You travelled five thousand miles. You hooked up with a loose cannon--possibly psychotic--vigilante who doesn't place much value on life...and a world class felon. You stressed my network to the max. You faced the world's deadliest martial artist. All to get back at a guy who didn't call you the next day. Was it worth it?"
Black Canary: "Yeah, it was."

Arrest me, cuff me. So worth it.

Brothers, oh brothers, my days here are done
The Dornishman's taken my life
But what does it matter, for all men must die
And I've tasted the Dornishman's wife

The Marquis felt, then, that much of what he had gone through in the previous week was made up for by the expression on Hunter's face.

Kalas: Remember, if you do kill me, you're finished, too.
Duncan: Maybe it's worth it if it rids the world of you.

Reid: (enters the room) Sorry, I'm late.
Rossi: I hope she was worth it.
Morgan: I hope it was a she.

Stephen Fry: What has large teeth and one facial expression?
Bill Bailey: [buzzes in] Janet Street-Porter.
[klaxon]
Bill Bailey: I took a fall, but it was worth it.

Tex: Alright screw it. You guys get behind me, and stay tight.
Tucker: Bow Chika Bow Wow.
Tex: Never mind, Tucker's in front.
Tucker: Meh, it was worth it.

"Just so you know, I'm running a fever, I've got a nasty cough, and my sinuses are filled with something I can't even describe. And it was totally worth it."

Did I ever tell you about the time I met Varok Saurfang? I asked him to sign my massive pectoral muscles. He backhanded me instead, which is why I sometimes forget things now. It was totally worth it.

Marigold: You're acquitted, and I'm sorry about the new dent.
Pintsize: Ith wath tothally worth ith.

"TOTALLY worth it!" (falls to his doom)

"Goodbye, friends. I never thought I'd die like this. But I always really, really hoped."

Zapp: (contently) I had snu-snu.

Debbie: Stormy, not another word out of you. Period.
Stormy: (Dramatic Pause) ...Speaking of period...
(Jump Cut to Stormy hanging in chains in a dungeon.)
Stormy: It was totally worth it!

Muscle Man: It was worth it! (high-fives High-Five Ghost)