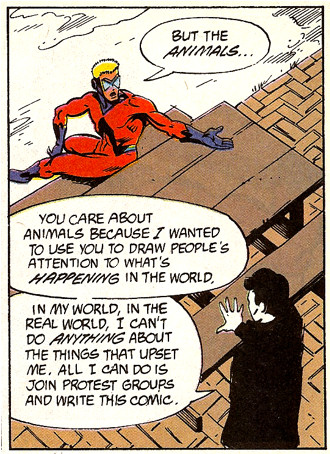 Animal Man discusses this trope with his writer.

Obvious authorial intrusion. When the characters start behaving like idiots or against their previously established characterization because the writer damn well needs them to in order to tell their story.

May also occur when a character is accused of being used just to show a particular point of view, and not because they actually have it. The high-falutin' literary term for a character designed to express the author's preferred opinions (often the Only Sane Man) is the raisonneur—here at All The Tropes the preferred term is Author Avatar.

At best, the only difference is a rather heavy-handed Aesop. At worst, narrative is put aside so that an Author Filibuster can be conducted. When you agree with what the author has to say, but feel that their method of conveyance is detrimental to the work, it becomes a case of Don't Shoot the Message. Creator Breakdown occurs when personal issues within the writer's life drives the authorial intrusion.

Of course, interpretations will vary and may be wrong...

Examples of Writer on Board include:

Retrieved from "https://allthetropes.org/w/index.php?title=Writer_on_Board&oldid=1914743"
Categories:
Cookies help us deliver our services. By using our services, you agree to our use of cookies.