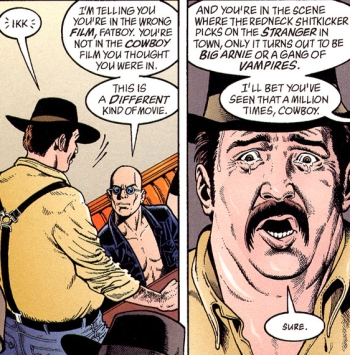 Sometimes, you can take being Genre Savvy too far, and wind up just as Genre Blind as the poor idiots who split up in a haunted house where one of you is a murderer.

If a character in a series that has a Fourth Wall thinks mainly in terms of tropes, you've probably got a character who's Wrong Genre Savvy. Even if you're correct about being in a story, it's possible for you to guess wrong about your role in the story, the genre of the story, or where on the various sliding scales your story is. Any way you spin it, it's still a common way of subverting Genre Savviness.

See Heroic Wannabe, Wide-Eyed Idealist, Grumpy Bear, Prince Charming Wannabe, and Lord Error-Prone for characters with this trait and Genre Savvy for when characters get it right. Death by Genre Savviness is a related trope. See also This Is Reality, Hero of Another Story, Entertainingly Wrong, Reality Ensues. May be confused with Too Dumb to Live.

Examples of Wrong Genre Savvy are listed on these subpages:
Retrieved from "https://allthetropes.org/w/index.php?title=Wrong_Genre_Savvy&oldid=1537123"
Categories:
Cookies help us deliver our services. By using our services, you agree to our use of cookies.