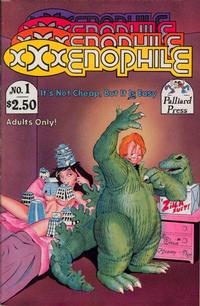 The comic was originally published in ten comic books, at which time the contents were collected into five graphic novel compilations. Each graphic novel also added a new story (generally a second look at characters from an earlier story such as the superhero Orgasm Lass and her four-armed male sidekick Fourplay). These new stories were compiled separately in a final, eleventh issue of the comic book; since then, a sixth graphic novel (with an all-new story) has been published. In 2004 Studio Foglio released XXXenophile Quick and Dirty, a 20-page booklet of previously unreleased material, as a stop-gap fundraiser.

The comic series was highly acclaimed for both its artwork and story that, while employing sexually explicit content, maintained an artistic quality that many comic book critics felt was superior to the more standard fare of this genre. In the stories of the anthology, Foglio satirizes numerous plot elements of fantasy and science fiction, such as time travel, cloning, robots, deals with the devil, love potions and geasa[1].

The series is on an unofficial hiatus while their kids are underage, but some of the older stories have been collected on Slipshine.

...and now you'll never look at Girl Genius or Buck Godot quite the same way again.

Retrieved from "https://allthetropes.org/w/index.php?title=XXXenophile&oldid=1826549"
Categories:
Cookies help us deliver our services. By using our services, you agree to our use of cookies.