Everything About Fiction You Never Wanted to Know.
(Redirected from Xombi)
Jump to navigation Jump to search
/wiki/Milestone Comicscreator 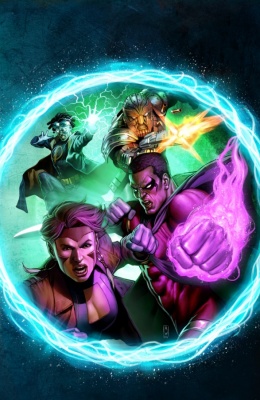 Milestone Comics was the imprint of Milestone Media, a coalition of African-American comics creators who felt that mainstream superhero comic books severely under-represented minorities. In a special deal with DC Comics, the latter company distributed Milestone's output, but did not have editorial control over it. Milestone kept the copyrights, but DC got all the trademarks. It should be noted that, despite primarily featuring Black characters, Milestone aimed to showcase more ethnicities, and some of its heroes were Hispanic, Asian and even, yes, White.

The primary continuity was known as the Dakotaverse, after the fictional Midwestern city where the initial titles published in 1993 took place. These titles were:

After a year, and the first major crossover of the books, Shadow War, two more titles were introduced, with a third one following a bit thereafter.

Dharma: And we'll do worse before we're through.

In 1994, the main Milestone titles crossed over with DC's Superman-related books, in the "Worlds Collide" storyline. In this story, a being with the ability to turn fiction into reality merges Metropolis and Dakota, leading to the heroes meeting and wondering which of them were real.

While the distribution deal with DC was sweet, and Milestone's creative teams were good, the line was hobbled by a perception that Milestone was "comics for Black people", which kept many fans from investigating the books. (The fact many of their character's origins involved negative ethnic concepts -Icon's with slavery, Hardware's with the Glass Ceiling, Blood Syndicate and gang violence, etc.- didn't help) At the same time, a glut of "new universes" was followed by a sharp downturn in overall comic book sales.

As a result, Milestone canceled some of its less well-selling series, and launched a new team book, Heroes, featuring Static and several popular secondary characters in more traditionally heroic action. This failed to overcome the marketing difficulties, and Milestone ceased publication in 1997, concentrating on their Static Shock series instead.

Recently, DC Comics struck a new deal with Milestone, which folds the Milestone characters into the DC Universe proper, as though they had always been there. For example, Static was recently a member of the Teen Titans. The revived version of The Brave and the Bold was used to reintroduce the Milestone characters by teaming them up with DC heroes (e.g., Hardware and Blue Beetle, Xombi and The Spectre) Xombi became a short-lived 2011 ongoing series, and Static Shock is one of the titles in DC's New 52 relaunch. How much of the previous history is still in continuity was unclear before, and even less so with the relaunch.