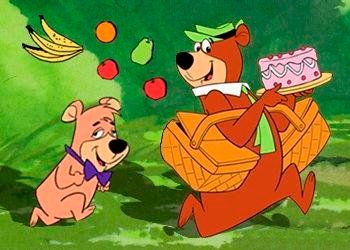 Originally a supporting character on The Huckleberry Hound Show, Yogi Bear was one of the most popular early Hanna-Barbera characters. Most episodes revolved around Yogi's attempts to do things that other Jellystone Park bears didn't do (or weren't allowed to do): make money, fly, dodge hibernation, escape—or simply relieve tourists of their pic-a-nic baskets. Yogi's sidekick, Boo-Boo, would often warn Yogi that "the ranger isn't going to like this!" Indeed, Yogi would invariably be scolded by Ranger Smith.

Basically, the premise was that Yogi and Boo-Boo would steal picnic baskets from visitors to Jellystone National Park, and hilarity would ensue.

The character was popular enough to headline his own series in 1961. Supporting segments on The Yogi Bear Show featured Snagglepuss and Yakky Doodle. In 1964, Hanna-Barbera released its first animated feature, Hey There, It's Yogi Bear!, through Columbia Pictures. In the 1970s and 1980s, Yogi and his contemporaries appeared in the following series:

There were also a few prime-time specials, the best-remembered of which is probably Yogi's First Christmas.

Tropes used in Yogi Bear include:

The 2010 feature film provides examples of:

Retrieved from "https://allthetropes.org/w/index.php?title=Yogi_Bear&oldid=1553831"
Categories:
Cookies help us deliver our services. By using our services, you agree to our use of cookies.