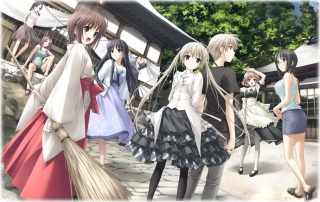 Following the death of their parents in a tragic car accident, Haruka Kasugano and his twin sister Sora are left orphaned. Rather than live with relatives, Haruka seeks comfort in fond memories of the past and decides to move to the country house left to the siblings by their grandparents, who are also deceased. Sora, unwilling to be separated from her brother, decides to follow him. Although Haruka's glad to relive the memories of the summer vacations he spent at his grandparents' home, Sora's much less enthusiastic.

Haruka reconnects his childhood friends Nao Yorihime, the neighbourhood older sister, and Akira Amatsume, the shrine maiden. He also becomes friends with his new classmates Kazuha Migiwa, the daughter of a local politician, and Ryouhei Nakazato, who is in Haruka's class because he ended up getting held back a year. Haruka also meets Motoka Nogisaka, a maid in the employ of Kazuha's father.

Originally designed as an H-game, Yosuga no Sora averts the standard Unwanted Harem by having a player express interest in a heroine early on in the game. The story then branches off and shows Haruka's developing relationship with the chosen girl. Each route's a story of drama, summer love and coming of age as Haruka adapts to his new responsibilities as Sora's de facto caretaker and learns how to provide the heroine with emotional support.

Currently has a manga and a 2010 twelve episode Animated Adaptation using a similar episodic format akin to Amagami SS: each heroine has an "arc" dedicated to her, but rather than an Alternate Continuity to reset an entirely new "arc", the next set of episodes features a What If for Haruka in vying for another heroine's heart.

Tropes used in Yosuga no Sora include:
Retrieved from "https://allthetropes.org/w/index.php?title=Yosuga_no_Sora&oldid=1715947"
Categories: