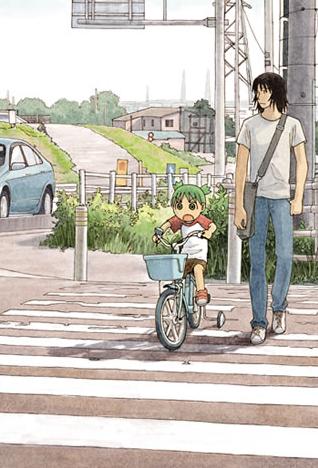 Yotsuba&! (Yotsuba to! in Japanese) is a Slice of Life comedy manga by Kiyohiko Azuma, creator of the acclaimed Azumanga Daioh.

It stars a cheerful, energetic five-year-old girl named Yotsuba Koiwai, who moves into a new neighborhood with her adoptive father. She doesn't know very much about the world around her and is incredibly curious, but her father and their new neighbors (the Ayase family) are willing to help her out. Or get dragged along in her wake, as the case may be. She does, technically, know the meaning of "restraint", but she has trouble pronouncing it.

Ten volumes have been released thus far in Japan. It was formerly licensed in English by ADV Manga, who brought out five volumes intermittently, but now by Yen Press which picked up with volume six (as well as reprinting the first five). The odd title comes from how every chapter (but one) is named "Yotsuba & Whatever," where whatever is the new thing or concept she encounters that day, and the exclamation mark comes from her way of throwing herself full-throttle into anything she does. The series has been described by one reviewer as "printed joy" and rightly so. Azuma somehow manages to create a series that's both feel-good happy and side-splittingly hilarious. Not for nothing is the series motto "Enjoy Everything."

Yotsuba's image has been appropriated (rather inappropriately) as the unofficial mascot of 4chan, for the simple reason that she is the "Yotsuba" to its Japanese inspiration, Futaba Channel[1]. One can only hope she never has to find that out, though in something of an Even Evil Has Standards moment, asking for Rule 34 of her will make you the immediate target of a vicious Internet Counterattack. That's right: Yotsuba is such a sweetie that 4chan of all places is fiercely protective of her innocence. Mostly.

Despite its popularity, no animated adaptation is in the works, and according to Azuma himself, Yotsuba isn't well suited to an animated format.

Tropes used in Yotsuba&! include:
Retrieved from "https://allthetropes.org/w/index.php?title=Yotsuba%26!&oldid=1965587"
Categories:
Cookies help us deliver our services. By using our services, you agree to our use of cookies.